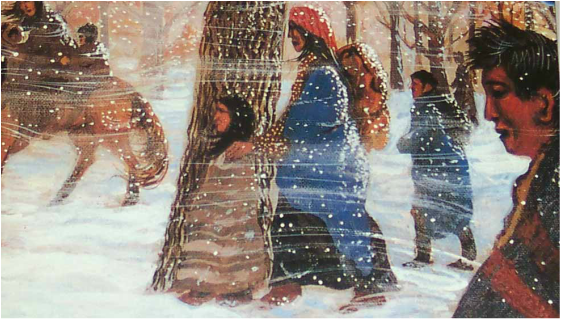 Painting of Native Americans walking along the trail of tears ("Clarcksville Online," 2015)
When many people think of the destruction of Native American populations in the Americas they think of what the american settlers did in the 1800s. What many people do not realize is that the persecution of Native Americans started around 1492 when Christopher Columbus sailed to the Americas from Spain in search of new lands. So those numbers you had in your head that were trying to rationalize the numbers killed just multiplied. Think of the numbers killed and displaced over those 100 years that American settlers actively removed and fought the Indians. Now imagine the numbers killed over a 500 year span. The numbers are incomprehensible. Not only are we going to be discussing the numbers here but the people who those numbers represent. 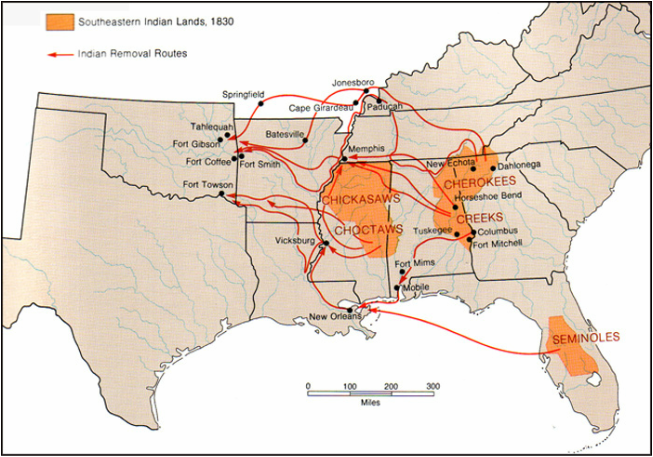 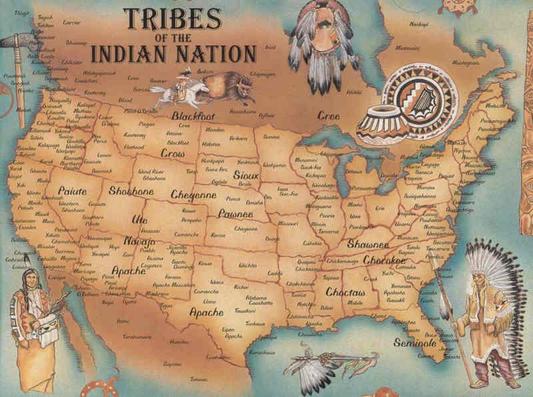 A map of where the Indian Tribes were located in the USA ("The First People of Virginia," N.d.) 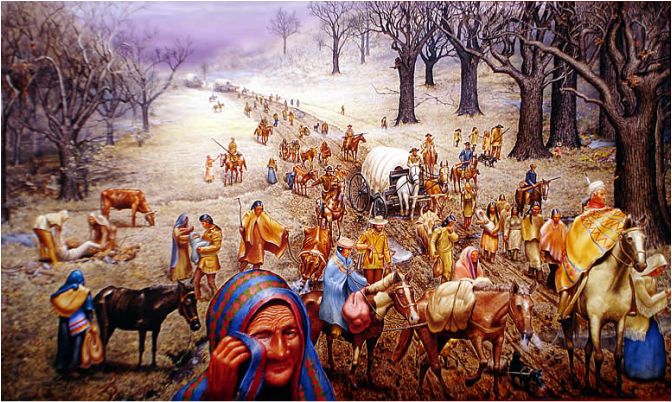 A painting of the Trail of Tears (ICTMN staff, 2015)
​European Settlers
The European settlers did everything they could to push away the Indians, whom they viewed as savages, away from their new civilizations. In the Indian Removal Act of 1830 it was decided that the Choctaws, Cherokees, and Creeks have to be removed from the territories that they were living in that were east of the Mississippi river to designated Indian territories that were in present day Kansas and Oklahoma (Ostler, 2015).  This resulted in what is known today as the Trail of Tears. This trail is over 2,000 miles long and runs through present day Georgia, Alabama, Arkansas, Kentucky, Illinois, North Carolina, Missouri, Tennessee, and Oklahoma (National Park Services, N.d.). In the 1830s over the course of this trail 2,000 Choctaws, 4,500 Creeks, and 5,000 Cherokees all perished due to a combination of disease, starvation, and exposure among other things (Ostler, 2015). To give you an example of how devastating the relocations were let us look at a specific instance. A group of 800 Potawatomis were forced to leave Indiana and walk along the Trail of Tears. 43 people died over the course of this journey (Ostler, 2015). Even though the journey was treacherous the destination could be just as bad. 700 Wyandot indians were relocated to the west. Out of the 700, 40 of them died, most of them children, due to diseases that we newly introduced to them by the settlers (Ostler, 2015).​

The different trails considered as the Trail of Tears are displayed in the pictures above ("National Park Service," 2012)
Green. J. (2013). 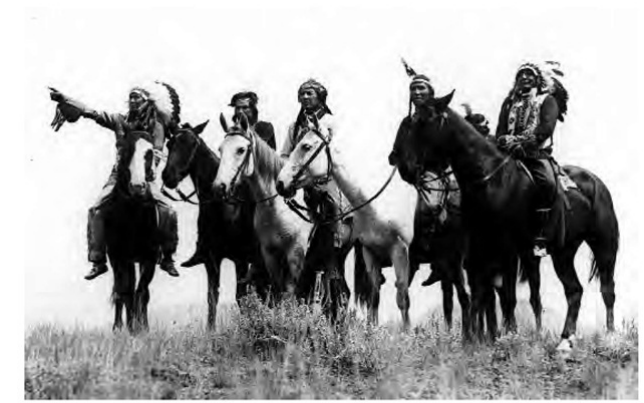 A picture of Crow Indians ("What-When-How," N.d.)
Crow Tribe
The Crows allied with the US government in 1860 thinking that it would give them protection. The government forced them to give up some of their land and the natural resources that came with them in the 1880s. With a lack of natural resources to live off of their number went from 3,000 in 1880 to 1,900 in 1903.