The American Indian Holocaust, known as the “500 year war” and the “World’s Longest Holocaust In The History Of Mankind And Loss Of Human Lives.”​

Christopher Columbus
Christopher didnt follow the orders of Queen Isabella, he enslaved Native Americans. They were very mistreated, enslaved and forced to convert to Christianity or murdered. He sent over 500 Natives to spain, when some of them rebelled they were either killed or captured as war prisoners. Queen Isabella heard about this and she didn’t agree with what they were doing so she told them to free and send them back to Spain. He was told to do this but he didn't. There was a new law called “encomienda,” that made it so when settlers bought land they also bought the inhabitants of the area. Meaning the Natives were legally forced into enslavement and they had pretty much everything taken from them. Christophers goal was to have slaves doing all the work because he wanted all their gold and land. (“Native Americans, Treatment of Spain Vs. England”, N.d.)

​
Andrew Jackson
​Andrew Jackson was a wealthy slave owner and famous indian killer, given the nicknames “Sharp Knife” and “Indian Killer.” Jackson eventually became President of the United States and shortly after taking office worked to pass through congress the “Indian Removal Act.”  The goal was to force all Native People to relocate West of the Mississippi River, into what was thought to be wastelands. He wanted their resourses and land that they had.  The few Indians that stayed were to become citizens of the U.S.
Jackson led the first Seminole War. A lot of indeians has their land taken in the South so amy nmoved down to the wetlands, such as the Creeks. What the Seminoles would do was take in the run away slaves. Later Jackson was charged with eliminating this threat and have such a bloody thing happen by burning villiages and destorying food supplies. (Toensing, 2012).
​
(Bobblehead George, 2015)
De Soto
Soto did not like people in his way. He didn't follow the kings orders to keep Natives well and convert them to Catholicism. WIthout any stop Soto enslaved, mutilated, and executed many Natives. As he explored the East Coast of North America and dicovered Cherokee towns. The leaders welcomeed Soto and his spanish soldiers. They must have done this becuas they knew that De Soto and his men have been killing and enslaving other Native Americans nearby. After awhile of being there Soto tried to tell the Cherokee leaders that he wanted their gold and silver and wanted them to tell him where it was. But they couldnt understand what De Soto was trying to say, eventually he got annoyed and angry and killed some of the Cherokee men and took some woman ans men to be slaves. (Hernando De Soto Arrives and Explores Flordia, N.d.).

It began with English explorers sailed home to England with a ship of Natives that were going to be used for slavery. They left behind smallpox which really meant it would wipe out anyone who had escaped. The Pilgrims and Natives didn't necessarily get along. By the time the Pilgrims arrived in massachusetts Bay they found one living Native, a man named Squanto who had survived slavery in England. Being nice and some what scared he taught the Pilgrims how to grow corn and to fish. By the end of that year the pilgrims held a great feast honoring Squanto and the Wampanoags. The word started to spread that there was new land the be owned and boat loads of people started coming to the land. Joined by other british settlers, they seized the land. The pequot Nation did not agree to the peace treaty so Squanto fought back. Making the Pequot war one of the bloodiest Indian wars ever fought. All the people wanted was the Natives land and to push them out because they didn't mean anything to them. (Bates, N.d.). 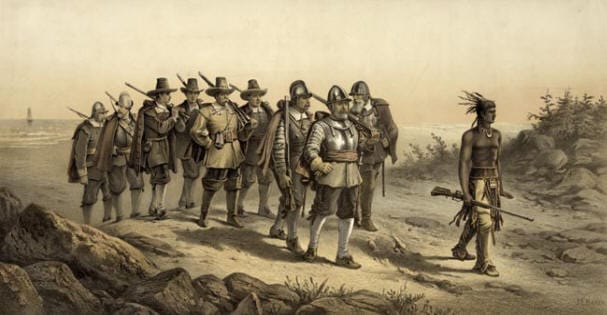