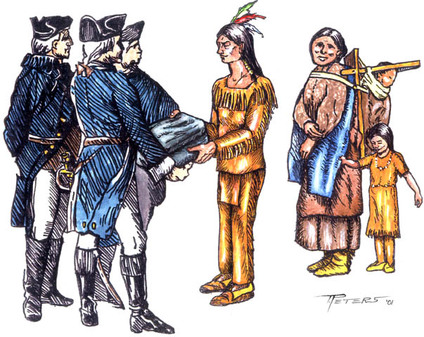 Colonists giving Natives smallpox blankets ("Jeffery Amherst and Smallpox Blankets" n.d.)
The Native Americans started to be affected by the European Expansion almost immediately. No matter if it was for freedom of religion, to find gold, or to start a new life in general, the Europeans continued to immigrate to North America. The genocidal tendencies began almost immediately after the European exploration of North America. A main cause for the deaths of the Native Americans was disease and malnutrition. Almost 90 percent of the Native population was killed through diseases. Many of these diseases were caused by the livestock. The Natives were not accostomed to the pathogens that came with domesticated pigs, cows, and sheep. The diseases caused by these animals as well as the ones brought by the Europeans included measles, influenza, whooping cough, bubonic plague, cholera, scarlet fever, syphillis. Sometimes, diseases would be purposefully transmitted to the Native Americans. For example, the commander-in-chief of the British forces in North America, Sir Jeffrey Amherst wrote "You will do well to try to inoculate the Indians [with smallpox] by means of blankets, as well as to try every other method, that can serve to extirpate this execrabel race" to Colonel Henry Bouquet at Fort Pitt ("Atrocities Against Native Americans", N.d.).
​ 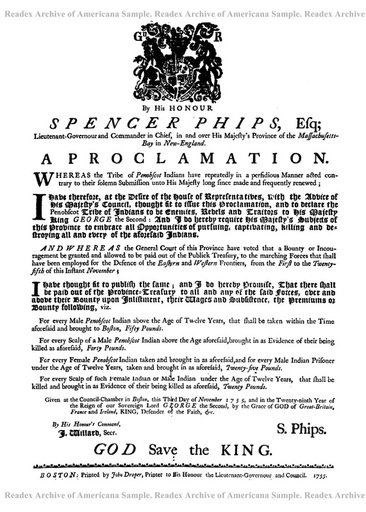 Copy of Phips Proclamation ("The Notorious Proclamation" 2013)
1755 Phips Proclamation
The Penobscot are apart of the Wabanaki Confederacy who was located in the current Massachussets area. This proclamation was put in place by the lieutenant govenor of the Provinince of Massachussets Bay, Spencer Phips . Phips decided that the Penobscot people were enimies, rebels, and traitors to King George II. Phips called on all of the people of the Provinince of  Massachussetts to "Embrace all opportunities of pursuing, captivating, killing, and Destroying all and every of the aforesaid Indians." Through this proclamation, it was promised that a bounty would be paid by the colonial government for every Penobscot Indian captured or killed and brought to Boston. For every live captive Penobscot males 12 years and older, 50 pounds would be paid to the bounty hunter. The bounty hunter would also be paid 40 pounds for every scalp of a male Penobscot over 12, 25 pounds for scalps of women, and 20 pounds for the scalps of children. Some people saw this as a very easy way to get money especially due to the fact that the average annual salary of a teacher for this time period was 60 to 100 pounds ("Phips Bounty Proclamation", N.d.).
(Maine-Wabanaki REACH, 2015)
Indian Removal Act
When the United States started expanding into the south, they ran into land owned by the Cherokee, Creek, Choctaw, Chicasaw and Seminole Natives. The United States soon took action. There were many wars and fights between the white settlers and the Natives of the southeastern land. In 1830, President Andrew Jackson, pushed the "Indian Removal Act" through Congress. This act gave the president power to negotiate treaties with any native tribe living east of the Mississippi River. In exchange for these lands, the Natives would be given land west of the Mississippi. If any of the Natives wished to stay, they would become citizens of their home state. Many Americans did not believe that they would ever expand westward, so the Native Americans could live peacefully and govern themselves west of the Mississippi. Therefore, some Americans believed that the "Indian Removal Act" was helpful to the Natives whereas others saw it as an excuse for the government to treat the Natives brutally and inhumanly.
The majority of the Seminole tribe refused to leave their land which ultimately lead to the Second Seminole War, which lasted 7 years (from 1835 to 1842). This war caused the deaths of thousands and costed the Jackson administration ten times the budget that was allotted for the removal of the Natives. By the end of this war, mant of the Seminoles decided to move west, but some refused. The remaining Seminoles ended up in the Third Seminole War which lasted from 1855 to 1858 when the United States sent the military to attempt to drive them off their land. When they still would not leave, the government finally paid them to.
Like the Seminoles, the Creeks also refused to move west. However, they signed a treaty in 1832 that gave up a large portion of their land to the white settlers and guaranteed them protection on the land they still owned. However, the Creeks were still cheated out of their land by the settlers. In 1835, when the Creeks began stealing from and murdering the settlers, the Secretary of War ordered the military to remove the Creeks. The Creeks had never signed a removal treaty, but by 1837, 15,000 Creeks had been forced to migrate west.
Unlike the Seminoles and Creeks, the Chickasaws saw the removal as inevitable and did not resist at all. When they signed the treaty in 1832, it promised them protection from the federal government until they moved west, but the government fell through on this promise when the white settlers could not be controlled by the War Department. The Chickasaws also had to pay the Choctaws for the right to live on a part of their western land.
The US government had used trickery with the Cherokee people. Some of the Cherokee signed the removal treaty even though they were not recognized as the leaders of the Cherokee nation. 15,000 Cherokee signed a petition in protest but it was ignored by the Supreme Court and allotted the Cherokee two years to move west voluntarily and at the end of that two years, they would be forcefully removed. After the two years, only 2,000 migrated which left 16,000 to be focefull removed. The U.S. government sent 7,000 troops to force the Cherokee out. They were not allowed to gather belongings and their homes were raided as they were forced into stockades at bayoner point. This began what is now known as the Trail of Tears. During this march, 4,000 Cherokee people died of cold, hunger and disease on their way to the west.
By the end of all the removals, the Jackson Administration had moved 46,000 Native Americans from their homelands to the western lands. This opened up 25 million acres of land for the white settlers and their slaves (PBS, N.d.) 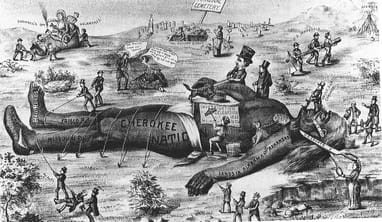 Political cartoon explaining effects of colonialism on Natives ("Indian Removal Act Quotes, N.d.)
Sand Creek Massacre
On the morning of November 29, 1864, what is now known as the Sand Creek Massacre. This massacre was committed by the Colorado Third Cavalry who was under command by Colonel John M. Chivington. The Colorado Third Cavalry went into the unprotected sleeping encampment of Chief Black Kettle's Cheyenne and Arapaho. Chivington's men murdered and mutilated a huge number of men, women, and children. The cavalry was instructed by Colorado Governor John Evans to "kill and destroy, as enemies of the country wherever they may be found, all such hostile Indians" (Renisink 2011)
Sand Creek Massacre (HaltomAPUSH. N.d.) 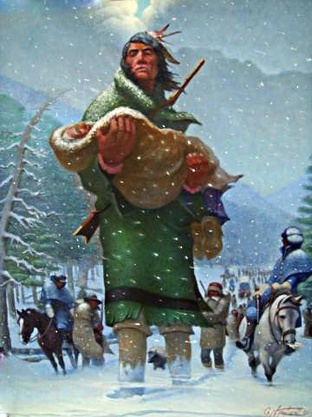 Native carrying a child ("My Choctaw Family" n.d.)
"War of Extermination"
The Sand Creek Massacre was one event that has been seen as most prominently filled with genocidal actions. However, there were other events and quotes found before this that also fit the criteria for genocide. In 1851, California Governor Peter Burnett stated that he wanted a "war of extermination" to continue "until the Indian Race becomes extinct". He wanted this "war" because certain Native American tribes were getting in the way of the the state obtaining its mineral wealth. The Governor that came after Burnett, John McDougal,  had similar views as Burnett. He said that if the negotiatons attempted with the Native Americans proved to be unproductive which would lead to war and ultimately lead to the "extermination of many tribes" (Renisink 2011). 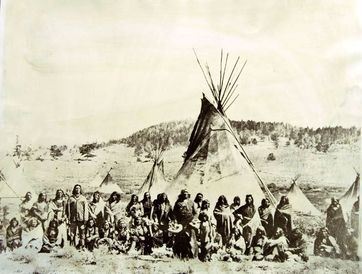 Shoshone Indians in front of a tipi ("Logan Library" n.d.)
Cache County Event
This event in Cache County, Idaho did not recieve the same descriptions as the Sand Creek Massacre even though the two events were very similar. The Cache County event was not recognized as a genocidal event even though it clearly is. The settlers and Shoshone Indians began to come into more contact with eachother and many tensions were beginning. U.S. Army Commands were eventually dispatched to Cache County. The major date of this event was January 29, 1863, when Colonel Patrick E. Connors led his command in an attack in the Shoshone Cheif Bear Hunter's encampment. This altercation ended in 400 Shoshone dead most of whom were unarmed. These attacks were followed up by the raping of the Shoshone women and killing of Shoshone children (Renisink 2011). 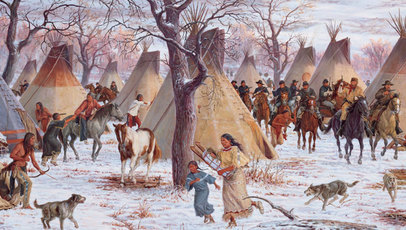 Painting of Battle of Washita River (National Park Service n.d.)
Battle of Washita River
This battle was lead by Lieutenant Colonel George Armstrong Custer and was an attack on the Cheyenne living with Chief Black Kettle. Custer was originally supposed to be suspended from his rank and command for one year. But ten months into this suspension, General Philip Sheridan disregarded the suspension because he needed Custer to lead a campaign against the Cheyennes due to the raids that they had led in Oaklahoma and Kansas. All of Sheridan's other men could not be trusted to follow through with the orders. Custer found a grouping of Cheyenne and did not bother to find out which group it was so he did not find out that this group was on reservation land and was promised safety by the commander of Fort Cobb. This was a peaceful group of Cheyenne that were avoiding all conflicts. Custer planned his attack for the morning of November 27, 1868. By the end of the "battle" 103 Cheyenne were dead. Although it caused many deaths, it was seen as a major victory for the United States. It restored Custer's reputation as well as getting many Cheyenne to move to the reservation (History.com Staff 2009).
​​